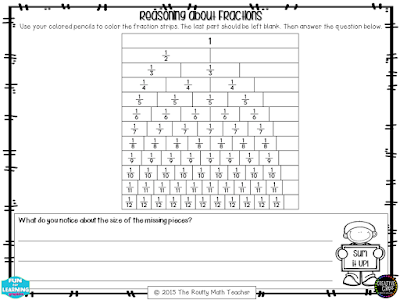 
In the 1980s, A&W, an American restaurant chain, unveiled a new menu item-- a third of a pound burger meant to rival McDonald's popular Quarter Pounder. After creating an expensive marketing campaign and a fan-fare filled roll-out, the A&W third-pound burger failed. It was only after soliciting feedback from their focus groups that A&W executives began to understand why. The American public believed the third-pound burger to be smaller than McDonald's quarter pound burger. Misunderstanding the four in one-fourth to be larger than the three in one-third caused Americans to believe that A&W was cheating them out of their money by charging a price for the burger that did not equal the value.
This story speaks volumes about how fractions are perceived by students and adults alike. It's important that our students learn to understand fractions in the same way that they understand numbers in other forms.

This activity focuses on comparing fractions by reasoning about their sizes. Development of this skill begins with a conceptual model. When presented with a variety of visual fractions, students begin to understand that the more pieces the whole is partitioned into, the smaller the value of each piece.

Click here or on the image above to grab a free copy of my “Reasoning About Fractions” activity.

Want to know more?
Head on over to The Routty Math Teacher website to read this week's blog post about making sense of fractions. Find it here!