Did you know that St Patrick wasn't born in Ireland?

He was actually born in Britain, and when he was a young boy he was kidnapped by pirates. He was brought to Ireland where he was sold as a slave, and worked for many years for a farmer. During this time he was forced to work on a hillside and eat and live with the animals. One night he escaped to France by stowing away on a boat, after he had a dream which showed him how he could escape. He trained to be a priest in France and after many years he began to have dreams in which the people of Ireland were calling to him to return. St Patrick eventually returned to Ireland where he worked as a missionary.

The story of St Patrick is an interesting one for kids to hear. The fact that there are pirates, a kidnapping, years of slavery minding and living with animals on a hillside, an escape and a subsequent return to Ireland, is a an eventful story for kids to hear. It also gives a personal story to the celebration of St Patrick's day. On several occasions I have had students act out this story for other classes and grades. Creating a dialogue which students act out, can be a fun way to share the story of St Patrick with others. Of course, I will admit I am slightly biased as I am originally from Ireland, so the story of St Patrick was something we grew up hearing every year. 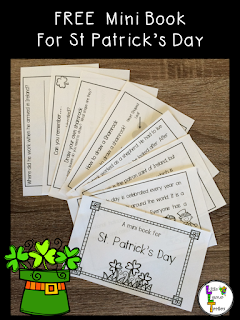