Introverts Can Bring Great Value to the Class – TRY THIS! 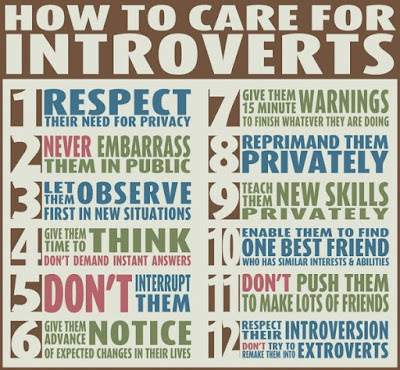 Let's see how we can encourage introverts to verbally participate more in class.  A students’ willingness to discuss, ask questions and/or express an opinion, make any class more interesting, fun yet challenging for everyone.

After reading the book Quiet - The Power of Introverts in a World That Can’t Stop Talking by Susan Cain, I learned that the most innovative and creative thinkers are not the self-promoters / extroverts, or strong personalities found in every classroom / workplace. They are the very students who prefer listening to speaking. Studies have shown that the most effective teams, classes, leadership structures are composed of a healthy mix of introverts and extroverts. So, it is important to find the introverted personalities.  The extroverts are easily identifiable; they are the ones who want to answer every question. “They prefer talking to listening, rarely find themselves at a loss for words, and occasionally blurt out.” (Page 11)

If Susan Cain is correct that introverts are the most innovative and thoughtful thinkers, I reasoned they were probably thoughtful clear writers.  Writing is a powerful silent voice. Great discussions need powerful, intelligent, clear, reasoned voices.  I take time to identify these students the first week of class by their short written paragraphs during a Future Me goals assignment.  If their sentences were precise, demonstrating clarity of thought, details and organization, I place a mark on the seating chart.  (Generally, these are not the students who eagerly give answers and/or monopolize the discussion.)   These are students I will call on, if they demonstrate they would rather listen than talk.

The extroverts willingly participate in class discussion. If you let them dominate, they will answer every question, blurt out and speak before they think. Once the talkers begin, I ask the silent best writers open ended questions that require sentences instead of yes or no. Over time, the class discourse becomes much richer when the quieter students are encouraged to share their information.

Once they see the proverbial “I didn’t think of that" head tilt / eyebrow lift from their more outspoken peers, it is a visual validation particularly when followed up by questions and /or comments. When there is success / acceptance, there is more participation.   I discovered the extroverted students speak in generalities whereas my best writers / introverts speak with a more informed detail. Details elevate the level of discussion; after a while the extroverts don’t dominate the discussion and when they do enter into the discussion there is evidence they thought before they speak. 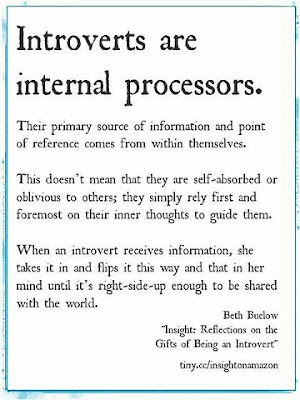 I love stories that personify my point.  Susan Cain relates a story demonstrating what is wrong with a leadership style that values quick assertive answers over quiet, slow decision-making (pages 49-50).
﻿
At the Harvard Business School, every autumn the incoming class participates in an elaborate role-playing game called the Subarctic Survival Situation. The students are told, “It is approximately 2:30 p.m., October 5 and you have just crash-landed in a float plane on the eastern shore of Laura Lake in the subarctic region of the northern Quebec-Newfoundland border.”

The students are divided into small groups and asked to imagine that their group has salvaged fifteen items from the plane — a compass, sleeping bag, axe etc. Then they’re told to rank them in order of importance in the groups’ survival.  First, the students rank the items individually; then they do so as a team. Finally they watch a videotape of their team’s discussion to see what went right — or wrong.   A group fails if any of its members has a better ranking than the overall team.   A group can fail when students listen to the more persuasive and assertive arguer.

One group had a person with extensive experience in the northern backwoods.  He had a lot of good ideas about how to rank the 15 salvaged items.  His group didn’t listen to him, because he expressed his views too quietly.

“Our action plan hinged on what the most vocal people suggested,” recalled a classmate.  “When the less vocal people put out ideas, those ideas were discarded.  The ideas that were rejected would have kept us alive and out of trouble, but they were dismissed because of the conviction with which the more vocal people suggested their ideas.  Afterwards they played us back the video tape, and it was so embarrassing.”

Find your introverted students, encourage them to speak confidently, and encourage others to become good listeners. These are very important life skills. You do know, in every couple there is a better arguer (someone who attempts to prove by logic / reasoning). This person is not necessarily the better decision maker.