To Be Persuasive -- It is All About the Stories! 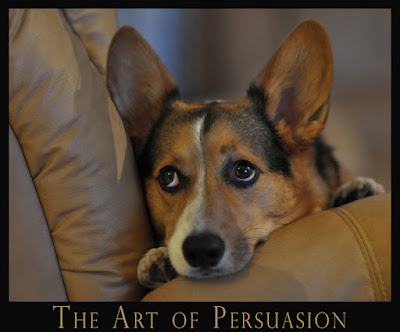 Persuasion -- it is all about the story.  Stories are an art form and we use them as an analogy to build lessons.  You might not remember the facts, but most people think about the stories and the emotions involved.  Stories tend to activate the imagination -- personal thoughts and emotions.

The purpose of a Health class is to give people information so they can make good decisions. So, we teach units about sex, drugs and nutrition etc. We give students good information, but students may get a good grade on each topic while still maintaining their current attitudes and behaviors. Information persuades some people, what transforms most is the story that you attach with the information. The story is a tool that activates the imagination of each one of your students. They see their future happiness threatened, which creates feelings leading to a decision being made. Information doesn’t do that. Information is the logic and rational thought you use to defend your position after you made your decision. Here is an example:

Sex, drugs, easy money all come attached to something:

(True story)  High school boy — “You don’t understand, girls are offering sex to us. We’d be a FOOL to turn them down. That’s like seeing a five dollar bill on the floor and you walk by without picking it up.”

Teacher: Have you ever watched the reality show Swamp People? (The students can inform the class about the show) There are people in Louisiana who hunt gators. It is a very lucrative high risk/reward profession. The hunters bid on the right to bring in X amount of gators in a 30 day period of time.

If you are going to catch gators, you first have to get their attention. Trolling for gators is a lot like how women troll for men. Women just appeal to their sexual nature. Question to the high school boy: How do girls who are offering sex to you, get your attention? Boys will tell you — it has to do with how the girl dresses, their behavior / attitude / suggestions / reputations, and they smell good too. — (Anything and everything that appeals to the male sexual nature will hook a young, therefore foolish / naive guy — it’s not that difficult.)

“How do you attract a gator?” — You appeal to the gator’s nature; it’s not that difficult, they will eat anything. The gator hunter wraps a huge wad of meat around a large hook which is attached to a steel cord which is bolted to something immoveable. The gator is a hunter, he hunts for food. He sees an easy meal; he’d be a fool to not eat the very thing that will nourish him and preserve his life. His powerful jaws clamp down on the wad of meat and the unseen hook. The gator doesn’t see the hook that is in that wad of meat. If you watch Swamp People, you’ll see the rest of the story. The hunters go to each trap and pull up the cord, attached to the hook that is embedded in the gator’s mouth. You see the struggle of man with rifle vs. angry strong 500 lb. gator. 98% of the time, the rifle wins.

That’s the way it is with sex — there is a hook in it.  (By the way, that’s the way it is with drugs, easy money, etc.) The young, the naive, the foolish don’t see the hooks, which are the consequences that come with sex outside of marriage. The wise know what the hook represents and runs away from it. Sometimes the hook is an STD, sometimes it is a baby, sometimes the hook is the emotional consequences, sometimes it is an abortion, sometimes it is a life time of regret.  (For those who teach through the lens of a biblical perspective — Proverbs Chapter 5—7 — Discusses the Peril of Adultery that poetically tells this story).

When I have a Human Growth and Development (sex) unit, I use stories about the toll of consequences using the contrast between short term pleasure and long term regret. For Drug units — stories of addiction, pictures of altered brains which make good decisions impossible.

Great resources for stories are your imagination, your life experiences and, one of my favorite the Dear Abby column. People relate to and remember stories, which is why we go to movies and watch TV.

I remember a time when I was a young teacher, a roommate became pregnant, hoped to marry the guy, but he left town without telling her and she became a single parent. Twenty two years later she met with this man, to discuss his family medical history for the benefit of their son. The ex-boyfriend had never married, had become successful with his own business and never been in contact with his son. She brought 5 pictures of the son he had never seen, from first baby picture to Georgia Tech cap and gown graduation picture. The Ex-boyfriend looked at those pictures and started to cry. She became very uncomfortable watching him pick up the pictures; he didn’t just cry, he was weeping, shaking and even reached out to hug her. It was a very emotional scene.   Those 5 pictures showed him the life he ran away from, the wonderful son who was adopted, raised and loved by another.   All he had was a successful business, a bank account and a recreational golf game; he lived alone -- full life vs. an empty material life. When the young ex-boyfriend snuck out of town, he had no idea of the future he was running away from. He ran away from this wonderful young man who looked like him.   The pictures activated his imagination.

Kids think it is just sex. Stories inform them — It is not just sex.

Sex comes attached to something. In this case a broken heart, and a lost son. This man made several efforts to establish a connection with this wonderful accomplished 22 year old son.   He had a lot to offer the young man — connections, a business and extended family. It was too late. To the 22 year old young man, his loyalty and time belonged to the man who adopted him and invested his time and love in him. The biological father was years too late; he was just a stranger who now wanted something from him.